If you are looking for a Santa Barbara Water Company that can install a custom filtration system in your home or business, Advanced Water Solutions  can help. If you are like most people, your home is the one of the largest investments you’ve ever made.  It takes so many little details all working together in perfect harmony to ensure your home runs like a well-oiled machine. Here are three ways Santa Barbara Water Company Advanced Water Solutions can take care of your water through home water filtration, so you can take care of yourself and your family:

Chlorine is a nasty but necessary chemical used to disinfect municipal water supplies.  Although it’s good for killing bacteria, it’s bad for your skin and your health.  Over-the-counter chlorine filters for your shower and sink only can do so much before they themselves get overrun with bacteria and buildup.  Our unique Whole Home Chlorine Filter removes chlorine for the ENTIRE home so you never have to change another filter again.  Plus, it cleans itself automatically it truly is low-maintenance. Contact us to talk about Chlorine Removal.

We all know the telltale signs of hard water.  Just like flies in the springtime, those pesky hard water spots, scale in the bathtub, and embarrassing cloudiness on the wine glasses keep coming back again and again.  Advanced Water Solutions offers a variety of hardness removal systems that ensure sparkling drinking glasses, clear shower glass, soft skin and hair, and lots of suds in your bubble bath (of course now you’ll have time to be IN the tub, instead of scrubbing the tub).

These days we can spend hours, if not days, pouring energy into worrying about the chemicals and contaminants we consume.  As an increasingly health-conscious nation, we all are becoming aware of the necessity of clean drinking water.  We’ve all heard the statistic that water makes up to 70% of our bodies (studies show in babies and small children water can make up even more). At Advanced Water Solutions, we provide an under-the-sink drinking water system which creates bottled-quality water from your existing water source!  Our systems are proven to remove common and not-so-common contaminants so you can be worry-free when it comes to the water going in to your body. 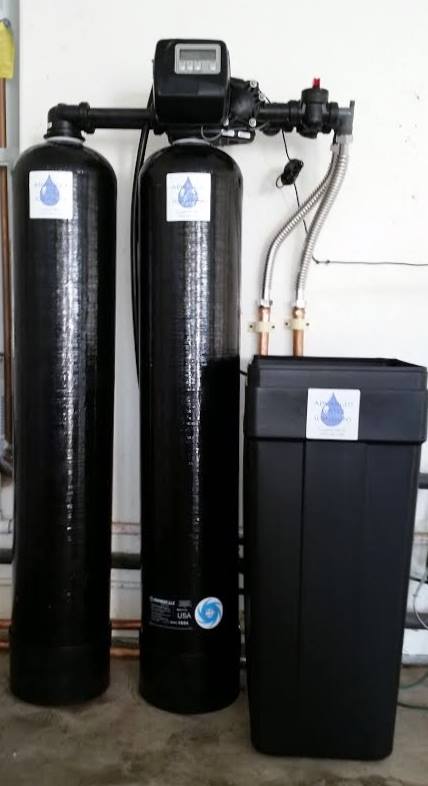 Here is a very nice twin softener installation done by our technician. This unit is not only going to give you soft water, it will also filter the water coming into your home for Chlorine, Chloramines, pesticides and herbicides.

Tired of hard water spots all over your dishes and shower doors? Call us today! 805-385-4740 This system is one of our newest and most efficient water softeners with whole house filtration. 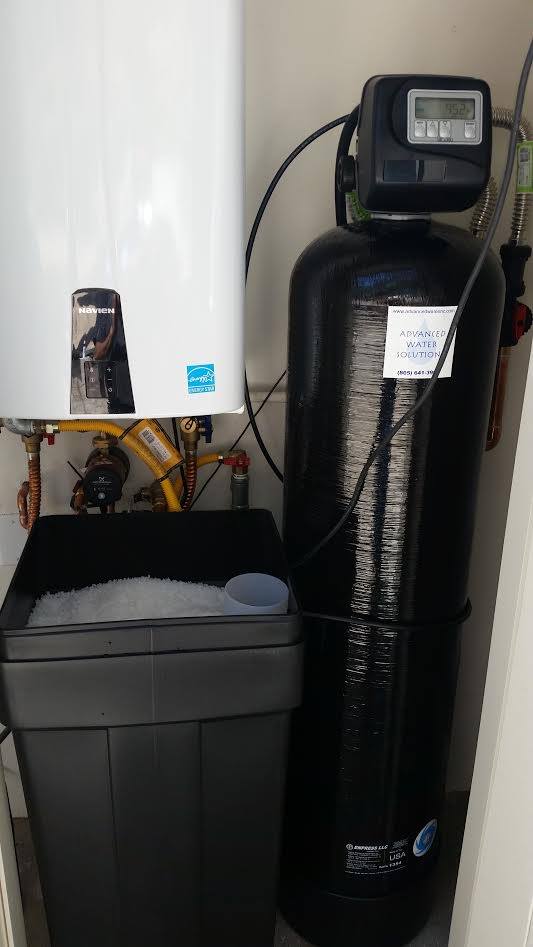 If you have questions about the benefits of soft water in your home or business, please call 805-385-4740

What are the benefits of soft water? If you live in Santa Barbara, our experience shows that you most likely have hard water in your home. That includes homes both on city water or a well. As a homeowner, it seems like there is always something to do to keep our house clean and presentable. However, with hard water we never realized how much time and money we were wasting each week.

HERE ARE A FEW BENEFITS OF SOFT WATER IN YOUR HOME

Santa Barbara is a year-round tourist destination renowned for its fair weather, downtown beaches, and Spanish architecture. Tourism brings more than one billion dollars per year into the local economy, including $80 million in tax revenue. In addition to the city's cultural assets, several iconic destinations lie within the city's limits. Situated on a south-facing section of coastline, the city lies between the steeply rising Santa Ynez Mountains and the Pacific Ocean. Santa Barbara's climate is often described as Mediterranean, and the city has been promoted as the "American Riviera". In addition to being a popular tourist and resort destination, the city economy includes a large service sector, education, technology, health care, finance, agriculture, manufacturing, and local government. Behind the city, in and beyond the Santa Ynez Mountains, is the Los Padres National Forest, which contains several remote wilderness areas. Channel Islands National Park and Channel Islands National Marine Sanctuary are located approximately 20 miles (32 km) offshore.

SOFT WATER IS BENEFICIAL THROUGHOUT YOUR HOME

The safe drinking water act of 1974, which dictates the quality of water that you are legally allowed to get out of your tap, regulates less than 100 water contaminants. However the EPA estimates there are around 60,000 chemicals in the US right now. Just think about all of the medicines and prescriptions we take, pass through our system, and then end up back in our drinking water unregulated. The point isn’t to scare you, just to educate you about how we’ve been helping people improve their water by making it healthier.  To reduce contaminants in your water up to 98% we have high quality Reverse Osmosis Drinking Water Filter systems available along with our dedicated service and maintenance. We also offer sediment filters, carbon filters (to remove chlorine and odors), Ultraviolet Lights (to kill living organisms), and even Water Ionizers to provide alkaline water.